We have had the privilege of working with very creative companies and equally dynamic people.  Below is a list of the type of businesses we have assisted over the years. Client Testimonials are also available.

Click on a link below to read a few short success stories.

We recently worked with a woman who wanted to start her own business.

She was in a transition period in her life including her anticipation of an empty nest.  She knew she would have more time to devote to her own interests.  Over the past two years, she had become very interested in and proficient at competitive pistol shooting. She chose to work with us because we offered a way to build a business based on her concern about personal safety in today’s world.  Her deep concern for helping others learn how to protect themselves inspired us to marry several of her hidden skill sets and talents.

Utilizing her passion for training individuals on personal safety strategies and leveraging her prior experience in marketing and sales has allowed us to help her build a successful business that brings her great pride and profit.

Sitting on a Gold Mine: A case study

We have been working with an entrepreneur who has owned her business for 10 years. She works in the home building and remodeling business.

She provides her clients with an enjoyable and efficient remodeling experience.  Her approach is unique in that she can put together a team that provides a streamlined process with as little disruption as possible.  What we told her is that she is sitting on a gold mine.  Her business processes are in place, and she wanted to work with us to create a marketing system that better reflected her unique capabilities.  We needed to establish a strategy to scale her business to accommodate growth.  Her goal has always been to transform how home building and remodeling is done so that it can be more customer friendly as families live through the construction process.

Until we talked with her about her gold mine, she had not realized how far she had brought the business and what potential lies ahead.  She has been motivated to move the business forward and recorded her best year in 2016.

We have been working with a vehicle repair company for several years. Our first goal was to make certain that the employee policy manual was updated. We also wanted to make sure that the company was compliant with all government regulations regarding personnel, standards, and procedures.

As we became more familiar with the workplace and its employees, we could move around the facility pretty much as needed. In so doing and because we are aware of the OSHA safety requirements, we noticed several safety violations. We called these to the attention of the owner who approved us to make the necessary changes. The violations were corrected, and new procedures introduced into the policy manual.

Just after our corrective actions, an employee was terminated for just cause. Unhappy with the company’s decision, he initiated a complaint with OCR claiming safety violations. We looked at the OCR report and were asked to make a reply to it. Because we had just made corrections, could take appropriate pictures, answer the complaints and assure the OCR that the company was compliant and no safety violations existed; the complaint was satisfied and closed without any on-site or desk inspection.

Our understanding is that the company saved several thousand dollars in citations.

A rather large client with whom we worked in structuring their manufacturing processes, had an HR person who was not full time. This person also knew very little about all the requirements of human relations work.

Knowing the need for this company to have a good, strong HR department, we were asked to find an HR specialist who could form and direct a department. We specified what a department should look like and what was needed to make it effective.  We also provided a job description for the person who would lead it.

After an extensive search and several interviews, we recommended an individual to the owners of the company. The person had strong knowledge and skill, and was the right fit the company’s culture. We suggested that she be placed on the organization chart at a vice president’s level so she could have the employees’ respect and recognize her authority. That was 11 years ago, and the HR department is still working like a well-oiled machine. 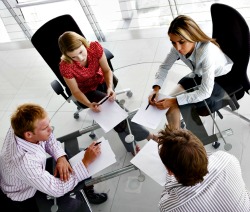 Start working with Dr. Ann today and build your business to work brilliantly!

We know what businesses of any size require to succeed.  We want to work with you and help you solve your professional career challenges