Women Leaders: Own Your Story and Tell It Well

Everyone has a story to tell. Women leaders are no different. So women, here’s important advice: own your story and tell it well. It can be challenging for some women to be the protagonist of their own tale. It seems that many women tend to talk about themselves only when it’s about them helping someone else. Rather, many tend to become weak-kneed when the narrative feels like self-promotion.

Too easily women slip into the roles assigned by others, into living the life that’s expected of them rather than the one that they carefully choose, highlighting their competencies and passions.

Our advice:  craft a meaningful narrative and own your story.

The first step is deciding which events to highlight.   The experiences that most easily come to mind often center around (1) what you believe about who you are and (2) impactful life lessons you have learned. When choosing stories worth including in a narrative, we often ask, “Can a woman share her experiences with confidence that her observations and courage will not only be welcomed but convey a message that is instructive?”

According to a 2018 Pew research study, many of the women interviewed believe that men still have an easier path to the top and that women have to do more to prove their worth.  Stereotypes still exist whether the bias is unconscious or blatant.  Because of this it becomes imperative for women to choose their story-lines carefully so that they demonstrate the strengths, abilities and talents women contribute in both personal and professional settings.

Research indicates that there is a difference in how men and women perceive themselves.  By beginning to understand these differences, women can look at the meaning behind their stories differently. They can begin to re-assign more instructive lessons about past experiences to assist positive outcomes from future endeavors.  Here is a cogent illustration from Joanne Lipman, from her book, That’s What She Said. When men succeed, they attribute it to their own grit and intelligence. Women attribute it to luck. “It’s hard for us to own our accomplishments. We diminish them, or refuse to talk about them, or give the credit to somebody else. We apologize all the time, even though we aren’t sorry.”

Practicing the ability to take credit for accomplishments is incredibly important for women.  Learning to own your story and tell it well will be beneficial for the women to follow in both their careers and personal lives. But the story being told must allow women to confidently acknowledge their own successes and accomplishments.  If women don’t promote themselves, who will?  This is not a time for grandiose propaganda, but for showing others that women can both contribute and lead.

The second step is figuring why these experiences are important.  In many ways past experiences guide future decisions.  Maybe an experience provided an indelible feeling of accomplishment or despair from defeat.  What is it about the story that brings meaning to others?  Do the stories and experiences help to remove stereotypical attitudes?  As Lipman states, women often question their self-worth.  “The women, on the other hand, not only didn’t know what they were worth, they weren’t comfortable putting a dollar value on their own contributions. They believed it was up to others to decide.”

The tragedy for women is that in many instances they have tried to retrofit themselves into a world with rules created by men for men.  Using the mantra, “own your story and tell it well,” we are urging women to cast themselves in a new light that illuminates their unique skills, knowledge, and abilities.  Again, the experiences that are included in their narratives should be crafted to teach and inspire future generations of women who follow them.

The third and final step is to explain why this narrative matters.  Women should no longer allow old, outdated stories to continue to guide the ways they navigate both personal and professional lives.  It’s time to put new meaning to these events so that they can move on with a refreshed and updated perspective.  These learned lessons should build self-confidence.  According to Lipman:  women lard up work conversations with qualifiers like “This may be a stupid question, but. . . .” or “I don’t want to bother you, but. . . .” We make statements that sound like questions, even when stating facts (“Shouldn’t we turn right here, not left?”). Women use language that makes them seem hesitant, that downplays their own status, and that implicitly cedes more power to the other person in the conversation—especially if it’s a man.”

With new updated perspectives given to old stories, the old meanings become irrelevant.  In this current environment, we need women who are confident in their own ability.  No longer tethered to outdated work habits and social expectations, women can be free to assert their own creativity and enthusiasm.

No longer should women allow others to define them.  Lipman describes what has happened to women in the past, “Sometimes, when a great opportunity arises, one supervisor will suggest a terrific female candidate, but others will shake their heads and say, “She’ll never want it.” Over the years, I’ve heard it all: She has a new baby. She won’t move. She doesn’t like to travel. To which the answer should be: “Let’s ask her. Let her make the decision.” She needs to know she is in this conversation, she is being considered for this opportunity, even if she doesn’t choose to take it.”

“Men spent centuries building the professional world, devising rules to make sure it was a comfortable place for them and that it was geared toward their particular qualities and skills. Like any good guest, women have looked for clues on how we are to behave in this foreign land. We have tried to understand and follow the local customs. We have intuited that in this world we are to be obliging, calm under pressure, and diligent, and to always keep our emotions in check. Our adaptive skills have served many of us well. But we aren’t in a man’s world anymore. Now it’s our world. And shame on us women if we don’t do something to change the way this game is played so that everybody is able to bring their best to the effort. Let’s embrace a new way of working that is equally geared toward our own qualities and skills.”

It’s time for women to step forward with a refreshed and honest narrative about where they now fit in this changing environment.  Own your story.  Tell it well. 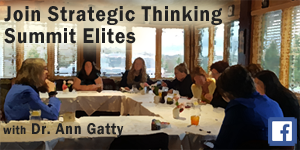